Book Now for the next course starting in January. Email improbablesguernsey@gmail.com 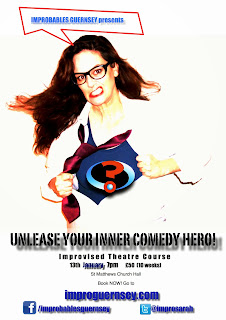 Any other questions just ask. email improbablesguernsey@gmail.com
Posted by ImproSarah at 9:31:00 pm No comments:

Release your inner improv hero! Photoshoot for the course starting in January 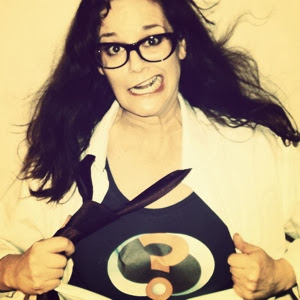 Contemplating the Next Course

With all the previous participants of Improbables courses chomping at the bit for more improv, I've hatched a crafty plan.
There will be two courses running on Monday nights. From 6 -7 pm I will be running a drop in class. This for those who have done the course and want to dust the cobwebs off their improv skills and stretch their improv abilities. (And I get to play along too!)
And from 7- 9:30 the full course for beginners/newbies.
Then at the end of the 10 week course I will run a 3 night run of improv so everyone can get a chance to play in front of an audience!
This not only means there'll be enough improv for everybody but it helps solve my issue with rehearsal venue as I can pay one fee for the evening and utilise the venue fully for the evening so it makes it more cost effective. #gettingmythinkingbrainon
I have nearly finished the poster and flyer to advertise the new course with the final details so watch this space.
Posted by ImproSarah at 11:20:00 am No comments:

As I'm reaching my 17th year of doing improv it has occurred to me that I may have a different perspective as an audience member watching improv to when I watched my first show at the now defunct Long Street Theatre.


I love playing improv. Performing it and practicing it whether there's an audience or not. I love acting and creating scripted/rehearsed theatre, but I am not as enthralled as I wish I was watching it. I thought it would be the same with improv but I am mesmerised by it and I think I know why.


When I'm teaching a course, I get to sit back and watch as the participants play out scenes and I love it. It's not just the surprise at watching untold and never before imagined stories take place. I find myself revelling in the micro expressions, the looks that give small glimpses into the working of the actors brain.

In scripted plays the actors armour, their artifice, is fully realised through rehearsals. As an audience we buy into the illusion and forget that they are actors and 'suspend our disbelief'. Improv is different. I'm not saying that when watching improv we don't suspend our disbelief or get lost in the story or believe in the characters, but there's another element to the magic. It's in these raw moments of improv that you can see both the artifice of the actor and their unique vulnerability collide. It's these little explosions that really catch me, that draw me in and keep me coming back for more.

In the early stages of the course when we're still getting around the concept of saying yes, there's a point where it hasn't quite sunk in and bam, suddenly you see actors catching themselves changing their nos into yeses. You see their mind backtracking, working it out, then moving forward in a split second. When an actor walks onto stage with a clear idea who they are (Pete's grandmother with a birthday chocolate cake) and before they can open their mouths the actor on stage shouts out 'Doctor! you're here' You can see the actor formally known as Pete's grandma suddenly let go their agenda and accept this new identity becoming the doctor. Hundreds of little moments like this pulsing through an evening teaching are what keep me coming back for more.

So I'm looking forward to some brain training and unleashing in January when I start a new full length course.

Yes lets! A new Course will be starting in January.
(As usual finding a venue to rehearse and perform in Guernsey is proving to be illusive. There just isn't any small experimental amphitheatre space left in Guernsey. Why? On my wish list in my imaginary perfect life I'd have a little theatre/cinema/ rehearsal space that could run comedy/improv and more experimental theatre projects without having to fork out an arm and a leg in the big echo'y venues we currently have.)

But in the mean time for those looking to make a new years resolution with a bang, a clang and a 'hell yes lets!', then a new course will be starting in the second week of January. Monday nights. So book your place or book your 'friend' a place. Contact Sarah improbablesguernsey@gmail.com