We run a number of different courses aimed at different skill levels for performers and non-performers.

Book course here
Drop In Classes - currently by invitation only

The first Improbables Guernsey Improv course ran towards the end of 2012 and since then Sarah has run several courses over the years. 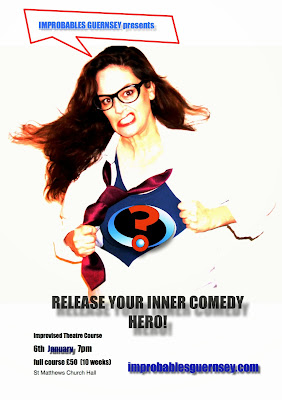 As part of  Cape Town's award winning Improguise players of Theatresports™ , Sarah trained with Megan Choritz and formed part of the core group of Improvisers who made it the longest running show in South Africa.
She has led countless workshops for professional actors, non-actors, corporate team building events and school programs. In Edinburgh in 2006, Sarah ran a series of courses and founded 'The Edinburgh Improbables'. Now Sarah is sharing her improv skills in Guernsey and has started an improv Comedy Troupe 'The Guernsey Improbables'.
Sarah has studied with Impro legend himself, Keith Johnston in London and has incorporated exercises and insights from his classes in her own carefully crafted course.

We run basic one day introduction to Improv courses too.

'Sarah's experience and competency were apparent from the first session she held for us. After a series of well structured workshops she had trained us all from complete novices into confident performers who went on to put on several favourably reviewed shows under her captaincy. Her knowledge of the various games in the theatre sports repertoire seems to be boundless and the feedback she gives at the end of each game is fair and valuable. The skills which we learned through participating on Sarah's course have helped us not only on stage but also in life. You'll find that, when faced with a surprising scenario, following the simple rules of improv will provide you with the confidence and conversational skills necessary to cope.'


Caroline Mathison - Edinburgh (Actress and Drama practioner)
'I was a bit apprehensive about going along to improv at first, as the idea of standing up in front of other people with no idea what you're going to do was daunting to say the least! However, Sarah's energy, enthusiasm and guidance made it a fun, friendly and very safe environment in which to play, take risks and learn new principles and skills.
As someone with a fair bit of previous performance experience and training, taking part in the improv group definitely helped me to be more open, spontaneous and vulnerable on stage, but it also boosted my general confidence to just 'go for' things in my everyday life.
All in all, improv made me a better all-round performer and a more confident individual - and gave me loads of laughs along the way!'

Jon Davey (Professional Photographer and writer)
'As someone who learnt Improv from Sarah in Edinburgh I can thoroughly recommend her courses. If you are in Guernsey and have interest in starting improv, or brushing up old skills, get along there!!'

Tristan Boscher - Guernsey
'Unleash your creativity and imagination by joining Improbables Guernsey, our first course in the Autumn was thoroughly enjoyable, Wednesday nights became a highlight of the week, initially scary just making theatre up on the spot but the course gives a great insight into the techniques and templates of improvised drama and once you learn that anything goes and you must go with it, you're in for a fantastic time! Having performed scripted drama for 20 years there was nothing more nerve wrecking than getting up in front of a packed audience and not having a clue what was going to come from our collective minds to amuse and entertain, such an adrenalin filled thrill and I cannot wait to do it again!'